No doubt you have looked at my avatar and wondered what it was about? Well maybe not. However, the following is the story of “Maran-Atha!”, the next boat in the series of vessels I have owned/built. Some of the photos have been rescued from a watery grave at some point and have sadly deteriorated, on the other hand, they help tell the story.

At the same time as I was building “Shiralee” a group of RAAF boys was building a 50 ft ferro-cement boat not too far from where I lived. It was a Sampson Sea Breeze, a Canadian design. The hull was launched as a bare shell with no fittings of any kind and towed to Newcastle Harbour where it sat for the next 7 years. Neglected and alone it was left moored to a long jetty. At one point floods tore it from its moorings and it was washed onto one of the harbour breakwaters where it suffered a large hole in one side, luckily above the waterline. The hulk was salvaged and towed back to its mooring. The next significant incident occurred when someone untied the mooring lines and the hull became wedged under the jetty. As the tide rose, the hull was trapped and then capsized and sank in 5 metres of water. No one took responsibility, the builders were long gone. The jetty owner was told to refloat it or face a fine. Divers went down and covered as many holes as they could. Next compressed air was pumped in to expel the water and the hull slowly came to the surface…where she was tied up and left once more.

A friend told me he had seen an ad offering a big boat for tender. “Shiralee” was becoming rather cramped as the kids were no longer babies. I took one look and recognised the boat at once. The jetty owner told me no one was interested and if I paid the cost of salvage it was mine…and that is exactly what I did. Where others could only see a dirty, damaged wreck, partly full of mud and water, I could see a beautiful ship, a new home for my family that could take us anywhere.

They say a boat is called “she” because they are often seen tied to buoys. Another reason is that it takes a lot of paint and attention to keep them looking good, although in S’s case I would dispute that! Anyway, I had the hull towed to Lake Macquarie, 15 miles up the coast, and began to rebuild and restore. The family and I had shoveled and scrubbed a couple of tons of mud out and given her a good clean up.

This photo shows the hull after clean-up. You may spot the temporary repair to the hull, a grey patch near the mooring pile. The first job was to chip out the repaired bit, wire in new reinforcing rods and mesh and then re-plaster. When finished you would never know it was there. 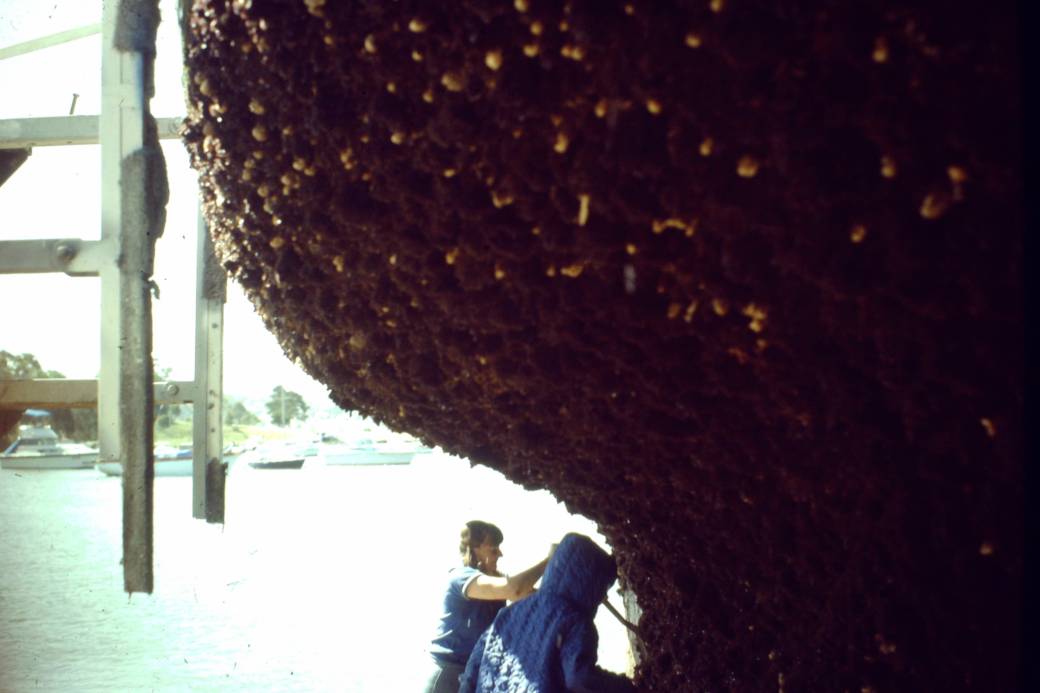 When she was hauled out of the water there was a layer of barnacles 4 inches thick.

Cleaned up…the bottom was perfect. That’s me standing under the bow. 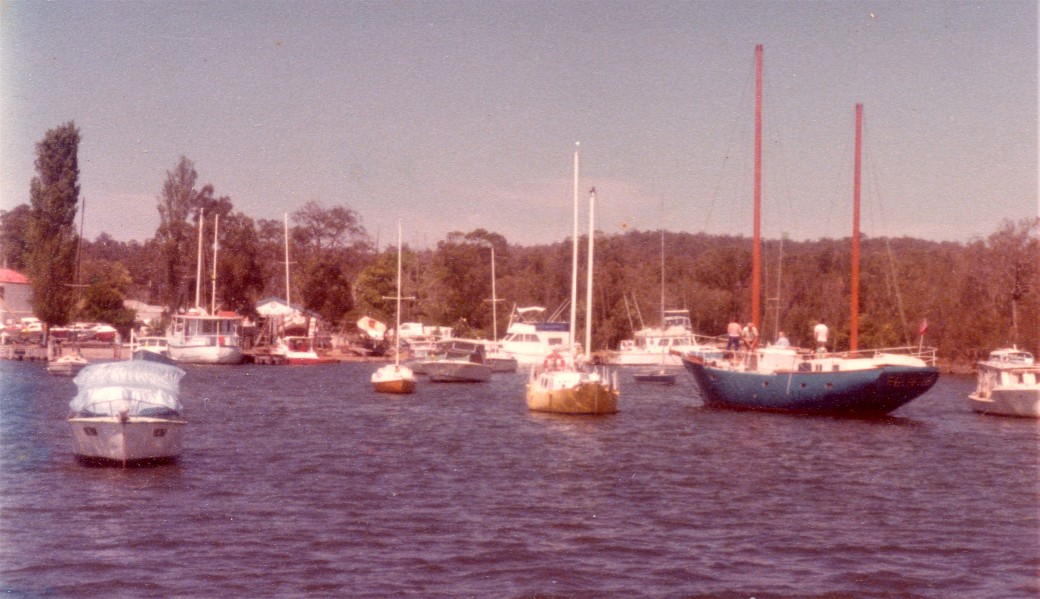 Passing “Shiralee”, now painted yellow. I tried blue for the hull but did not like it.

She was so big! After “Shiralee” this was a monster. I sat inside the empty shell wondering how I was ever going to fill up so much space. Well, it is surprising how a boat can shrink once you start putting in the furniture. Many friends said I was crazy. Others wished me luck. A few pitched in and offered help. Thank you!!

Next came the cabin soles, known to landlubbers as the floor. There were four levels. We required 3 cabins (bedrooms), a head (toilet), a bathroom, a galley (kitchen), a chart table, engine room and a workshop. I had to find and fit an engine and propeller along with all the bits that make it work. She also needed a rudder. Of course, every ship must have a name. I was 27 and what was known as a “born again Christian”. I must admit I have mellowed a lot since those days. I chose the name “Maran-Atha!”. It is from the Bible and basically means “The Lord is coming!” (I still believe that, by the way, although I also believe that each of us works out our own relationship with God, or not, as we freely choose.)

I was fortunate enough to have a job where I had a company utility vehicle, access to woodworking machinery and off-cuts of good quality timber. I also had the skills I had acquired as a Marine Engineer. I made as many of the fittings as I could, fitted glazing to the portholes and built hatches and ladders for access. I found a second hand diesel engine for a very reasonable price. It weighed a ton and the crane collapsed while lifting it on board. The engine landed on the deck and amazingly no damage was done. I had a good contact at a glass company and scored some bullet proof glass for the wheelhouse. Oregon pine (Douglas Fir) was ordered from the US for the masts and they were built in the warehouse where I worked. I carried them home on top of my work vehicle…late at night! I even made the sails!

The first galley. Later I removed the steps and rebuilt the whole thing. See next blog entry.

Two years later we were ready to go to sea! In my next blog I will describe living and traveling on board along with some alterations made as the children grew older. Way back in the early 70s I built a boat in the front yard of my house. I have been mad about boats for as long as I can remember, way back to when I was a toddler playing in the gutter near my home. As I grew older I was inspired by the sailing qualities of Chinese Junks and I had read of Western style vessels fitted with junk rig. There were no plans available so I decided to design and build my own. As a Marine Engineer, I had studied Naval Architecture and I had picked up quite a bit of knowledge of boat building. My first real boat was a 12 foot plywood dinghy with junk rig. It sailed well and was a lot of fun. ” Shiralee”, an old Australian word referring to a swagman’s bed roll, and meaning both a home and a burden, was to be 30 feet long and built from Ferrocement. A lot of “Ferro” boats were being built around the 70s and is to my mind an excellent way to build a strong, long lasting boat. “Shiralee” is still active in Queensland’s Moreton Bay area. However, building this way is time consuming, with well over 10,000 wire ties all done by hand. There is also over half a mile of 1/4 inch steel rod to mould into the shape of a boat. 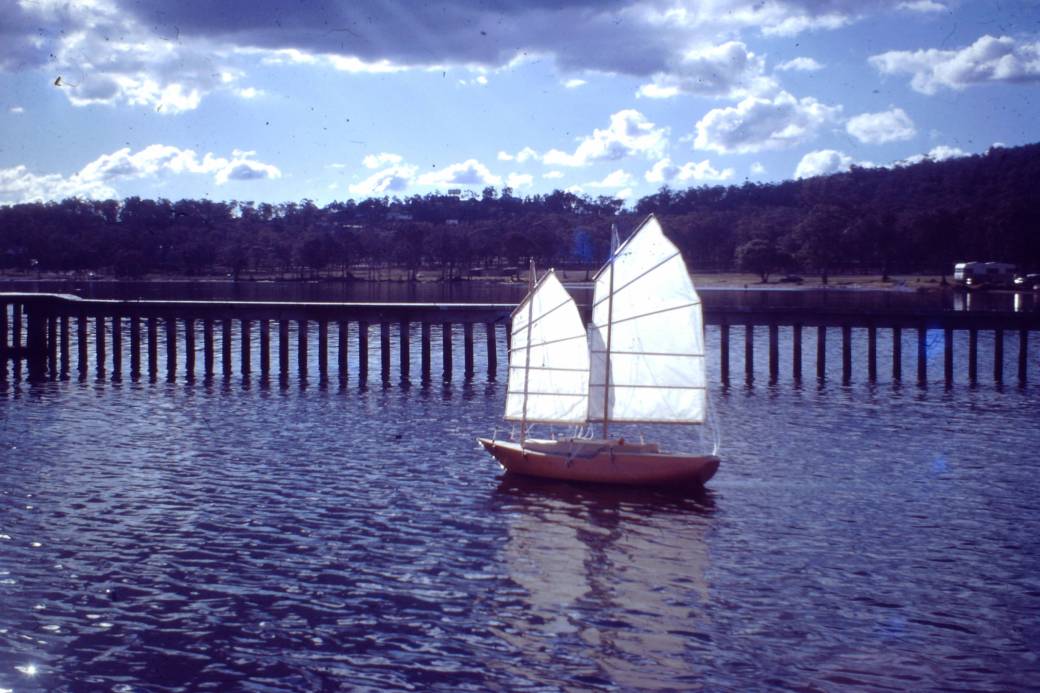 First, I built a scale model to check that the balance was correct and that the boat would be stable and also sail well. The model was a great success. It demonstrated that the boat would sail straight without constant attention to steering, in fact it would sail itself, adjusting to wind changes automatically. It was also stable and would right itself after a capsize. It was time to start building for real. 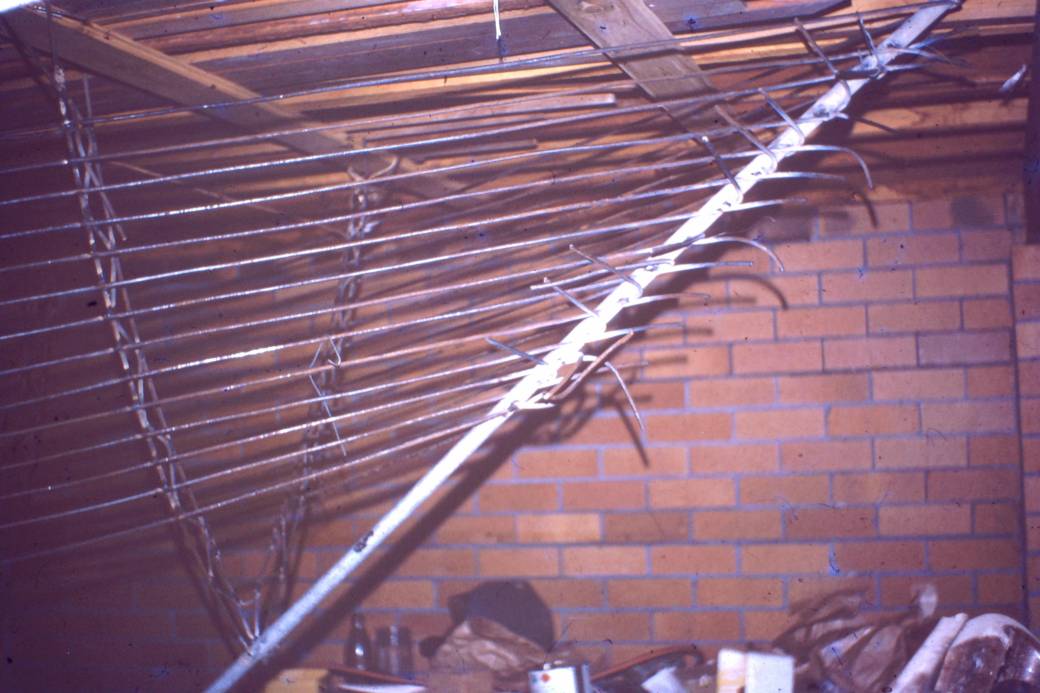 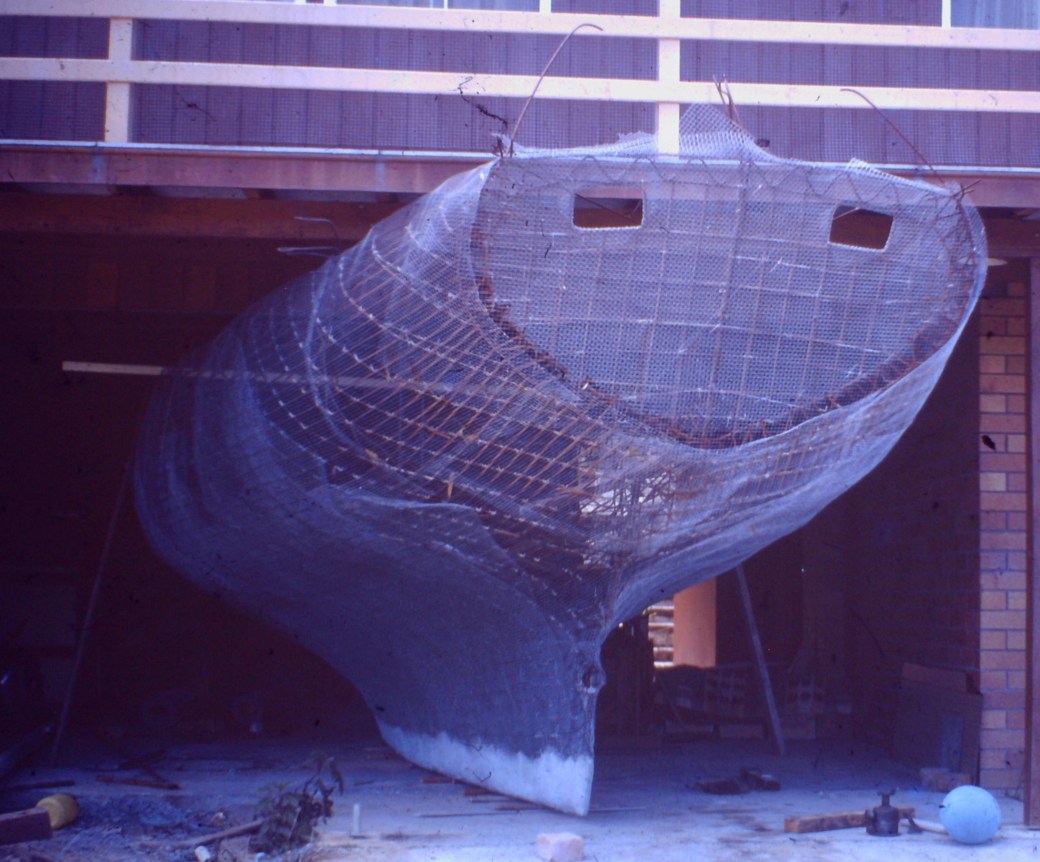 The boat was designed so that the hull up to deck level could be built in my garage. This was where much of the tedious bending and welding of steel rods could be completed out of the weather.

The next step was to move the frame to the front yard so I could finish applying 5 layers of wire mesh. Surprisingly, when this was completed the deck was strong enough to walk on. The cement only needs to keep out water, however it adds much to strength. The mortar used was carefully measured and mixed, it becomes a strong flexible structure after curing for around a month, being kept constantly wet. I hired a team of professional plasterers for an expert job. After 6 hours they were done. Using the knowledge I picked up from the plasterers, I completed the deck and cabin myself.

My children loved being on the deck! I also made the sails, masts and most of the fittings!

Came launching day. 7 tons was almost too much for the crane! We hired a low loader semi trailer for the trip to the water. The local TV station even put us on the news that night!

And, as predicted, “Shiralee” sailed very well. She was easily handled by one person and easily kept up with more conventional boats on most courses. She handled strong winds well and was a joy to sail. I was not able to predict the economic downturn that was about to hit. I was self-employed and soon had to sell my house. We lived on “Shiralee” for a few years until the children became too big and needed more room. That will be the subject of a future blog. How long did it take? Three years! Would I do it again? In a heartbeat!!